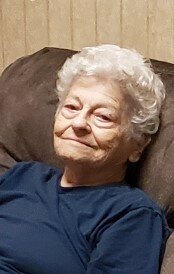 Obituary of Patricia A Kasha

Patricia Ann was born February 19, 1928, in Willowdale,
Kansas, to Henry Walter and Catherine Rhodantha
(Schonlau) Tatro. Patricia Passed June 6, 2022, at Jennie
Edmundson Hospital in Council Bluffs, Iowa, at the age of
94.
Patricia married Vlatimer Joseph Kasha November 27,
1951, in Herrington, Kansas. They moved to southwest
Missouri in 1953 and lived there until moving to Villisca in
1965.
Together VJ and Patricia had four children: Henry, Frieda,
James, and Patrick. Patricia enjoyed sewing in her younger
years and canned the fruits of her labor from her garden.
She was VJ’s right hand always helping him on the farm
when he needed help. She was always happy-go-lucky and
did what needed to be done.
Patricia is preceded in death by her husband of 49 years,
brothers, Jerry, Bill, and Mark Tatro; sisters, Elizabeth
Green, and Pauline Strand; half-brothers, Gene and Ivo
Click, half-sisters Catherine Von Dracek, and Mary
Williams.
She is survived by her children Henry E Kasha of Villisca,
Iowa, Frieda A Leasia of Damascus, Oregon, James A Kasha
of Villisca, Iowa, and Patrick S Kasha of Milwaukie, Oregon,
10 grandchildren, along with many other family members
and friends.

Share Your Memory of
Patricia
Upload Your Memory View All Memories
Be the first to upload a memory!
Share A Memory
Plant a Tree