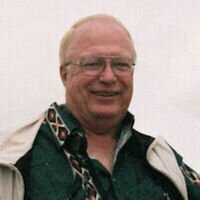 Please share a memory of Eddie to include in a keepsake book for family and friends.
View Tribute Book

Ed grew up in Clarinda, Iowa, and graduated from high school there.  He then went on to graduate from Western Wyoming Community College and Northwest Missouri State University. He also attended law school in Kansas City for two years.  He was employed by the states of Iowa and Wyoming as a social worker for over two decades.  Ed owned and operated High Country Energy, a gas well testing service in southwest Wyoming. Ed enjoyed hunting, fishing for trout at Roaring River State Park, collecting Cushman motorcycles, and creating floral arrangements for friends and loved ones.

“This isn’t goodbye, it’s see you later because we know we will.”

Share Your Memory of
Eddie
Upload Your Memory View All Memories
Be the first to upload a memory!
Share A Memory
Plant a Tree