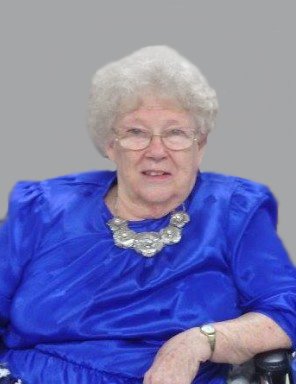 Please share a memory of Thelma to include in a keepsake book for family and friends.
View Tribute Book

Thelma Louise Kent, born in Greenwood, South Dakota, January 22, 1937, to Oscar and Norma Palmer. Her family then moved to Henderson, Iowa where she grew up and graduated high school in 1955.  Thelma moved to Clarinda to attend collage and met and married her husband Orville on August 5, 1956. She then became an Air Force wife for 23 years, living in Iowa, Kansas, Colorado, Germany, Florida, Nebraska and New Mexico. To their union they were blessed with five children, Earl Palmer, Randall Vernon, Linda Louise, Christine Lorraine and Juanita Laverne.

Thelma was a child care provider and a homemaker, she loved her family and was very involved in her grandchildren and great-grandchildren’s lives. She loved to bake and sew and was a member of the American Legion Auxiliary unit 98

She is proceeded in death by her parents, her husband Orville, a brother, a sister, sister-in-law, 3 brother’s-in-law and one grandson.

Share Your Memory of
Thelma
Upload Your Memory View All Memories
Be the first to upload a memory!
Share A Memory
Plant a Tree