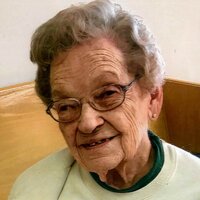 Please share a memory of Dorothy to include in a keepsake book for family and friends.
View Tribute Book

Brockhaus-Howser-Fillmer Funeral Home in Norfolk, Nebraska is in charge of arrangements.

Dorothy Mae was born March 12, 1924, in Greenville, Tennessee to Clyde and Chassie (Adams) Williams. Dorothy was the oldest of five children. Dorothy’s parents died when she was a sophomore in high school. She lived with foster parents, Fred and Icle Fisher, until she graduated from high school in Villisca, Iowa. The Fishers later adopted Dorothy when she was in her 50s, wanting her to be legally their daughter.

Dorothy married Gilbert Gray on February 26, 1944, in Osceola, Iowa. Dorothy’s youngest sister, Deloris, was raised by the couple and adopted by Gilbert. Three children were born to Dorothy and Gilbert.

Dorothy and Gilbert moved from Iowa to Bennington, Nebraska, then to Blair in 1957. Dorothy had a variety of jobs, which began with deboning chicken legs at Campbell’s Soup Company in Fremont. This unusual job earned Dorothy an appearance on The Art Linkletter Show during a vacation in California, when she told Linkletter she was a “leg girl.” In Blair, Dorothy worked at B&C Clothing, Ryder & Company Accounting, Sampson’s Drug Store, and Klopp’s Jewelry.

Dorothy and Gilbert loved to travel and did so until Gilbert’s death in 1978. Dorothy married Harry Tucker on October 5, 1980. Harry died in 1987.

Dorothy remained close with her four siblings and loved to host them and her lady friends at her home in Blair. She moved to Westside Regency in Stanton in 2013, and to the Health Center in 2018. Dorothy loved her friends and the workers at Stanton.

Share Your Memory of
Dorothy
Upload Your Memory View All Memories
Be the first to upload a memory!
Share A Memory
Plant a Tree