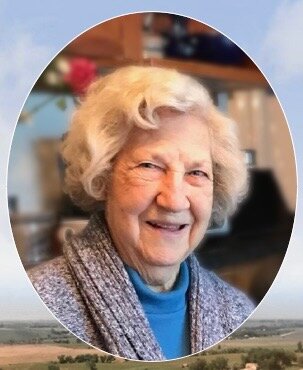 Please share a memory of Hope to include in a keepsake book for family and friends.
View Tribute Book

Hope Amelia (Fine) Pratt, 93, died at her Eiler Place home in Clarinda, Iowa, on June 3, 2022.   She was born on March 10, 1929, on a farm just west of Siam, Iowa, and was the baby of four daughters blessed to parents Ralph Douglas “Hoker” and Viva Amelia (Shields) Fine.  Hope always spoke highly of Ernest Gray, who braved weather conditions that day to complete the journey on the muddy forerunner of the “Red Line” road to New Market, Iowa, in getting the doctor for her safe delivery.

Hope lived her entire life in the Siam and New Market areas.  Though the Great Depression affected everyone financially, her family was always wealthy in support and love for one another.  Having attended Siam School for grades K-8 and then graduating from New Market High School in 1947, her attained “Normal Training Certificate” enabled Hope to teach country schools for two years, the last of which was Lindsey School.  When her high school sweetheart, Bill Pratt, returned home to “good old southwest Iowa” from the U.S. Army and his stint in Austria, the couple married on June 27, 1948, in Clarinda, Iowa.

Hope and Bill primarily farmed for their entire married lives of 70 years, working the busiest parts of the year with brothers-in-law George Stanley and Bob Pratt and their families.  Hope embraced her role as a farm wife business partner, especially with her hard work in the garden and with their chickens, and was a vital part in the success of their farm.  Eventually, Hope and Bill bought the “Century Farm” three miles northeast of New Market and made it their home for approximately 48 years.  After Bill’s death in 2018, Hope made her home at the Eiler Place in Clarinda, Iowa, the following spring.

Hope loved competition and games of almost any type:  croquet, H-O-R-S-E, dominoes, wahoo, and 5-point pitch were some of her favorites.   She was disappointed when her parents would not allow her to play high school basketball, especially since that team earned a State Tournament berth in 1947.

The “Four Sisters” shopping trips and their other escapades were legendary.   Germs in her house were almost non-existent.  Hope and Bill enjoyed going to

auctions and garage sales, and they continually tried adding to their extensive collection of kerosene miniature lamps and Lefton birthday month angel figurines.  In their later years, they loved sharing their garden produce, especially ambrosia muskmelons and tomatoes, with New Market friends.   Hope was also known for being a great “from scratch” cook/baker; her cinnamon rolls were a specialty, and she taught both of her granddaughters how to make them.

Hope’s greatest love was her family, and she tried being together with them whenever possible.  As a parent, she was always present with love and support. Her sharing and caring nature will be remembered and cherished.

Share Your Memory of
Hope
Upload Your Memory View All Memories
Be the first to upload a memory!
Share A Memory
Plant a Tree