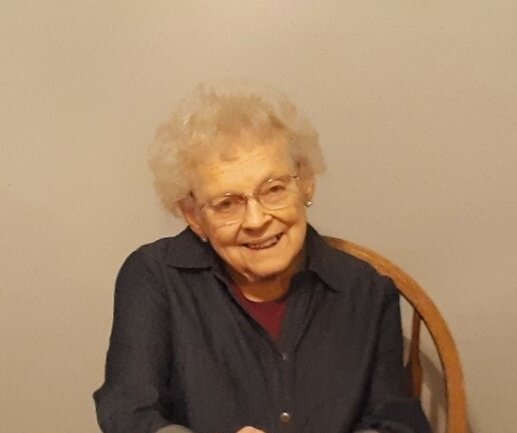 Following high school, she attended Concordia Teacher's College in Seward, NE. She began teaching at St. Paul Lutheran School in Yorktown, Iowa, in 1948, where she taught for two years. There, she met John Huseman, and they married on August 5, 1950, at Mount Olive Lutheran Church in Omaha, NE.

A devoted wife and mother, Volaine was a faithful member of St. Paul Lutheran Church. There, she taught Sunday School and served on the altar committee, sewing committee, and was an active member of the Lutheran Women’s Missionary League. She lived her faith and had a passion for Scripture, studying and memorizing Bible passages and hymn verses, even into her later years.

Volaine was preceded in death by her parents, her in-laws John and Ida Huseman, her husband John, her brother Don Weihe, and her sister Myrene Abels. She is survived by her sisters Darlene Martin and Shirley Albrecht; her children Christine Frantzen (Mike), Gary Huseman (Dee), Jane Hurst (Russell), and Luci Huseman, of Clarinda, Iowa; Jean Huseman of Omaha, Nebraska; and Cathy Pope (Jim) of New Ulm, Minnesota; nine grandchildren and seven great-grandchildren.

Memorials may be directed to St. Paul Lutheran Church or Clarinda Lutheran School.

Share Your Memory of
Volaine
Upload Your Memory View All Memories
Be the first to upload a memory!
Share A Memory
Plant a Tree