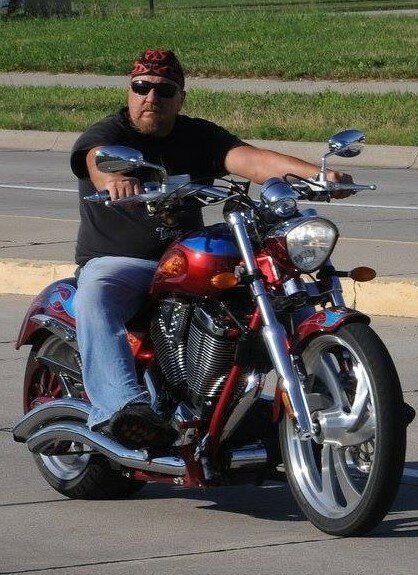 Please share a memory of Steve to include in a keepsake book for family and friends.
View Tribute Book

Steven Anthony Gibler, son of Danny and Gloria (Freshour) Gibler was born in Clarinda, Iowa on October 12, 1964.  He graduated from New Market High School with the Class of 1983.  While in school, he discovered that he was excellent at art- painting, pottery, etc.  During the district art show his senior year, he received a number of blue ribbons as well as a few red ones.  When we visited Northwest Missouri College to see if he wanted to go on to college, the head of the art department told Steve that he was one of the judges for that art contest and that Steve had earned the blue ribbon in each category he was entered in, but they couldn’t let him win everything, so they had to change some to red. (Good old politics.) While attending high school in New Market, he and his brother, Chris, started a DJ business to do dances at school.  This carried over after graduation and has been ongoing since then.

He worked in construction for several years.  While working for Warren Construction, he helped build AKS in Clarinda, after which he was hired to work at AKS.  He had been there for over 30 years. Steven was united in marriage to Gina Smith and together they had one son, Tyler. He enjoyed working on cars, riding four wheelers, his motorcycles and traveling.  He also was a good cook and loved to grill.

Memorials can be made to the family for help with the funeral costs, or you can donate online and the link below.
Online Memory & Photo Sharing Event
Online Event
About this Event

Share Your Memory of
Steve
Upload Your Memory View All Memories
Be the first to upload a memory!
Share A Memory
Plant a Tree