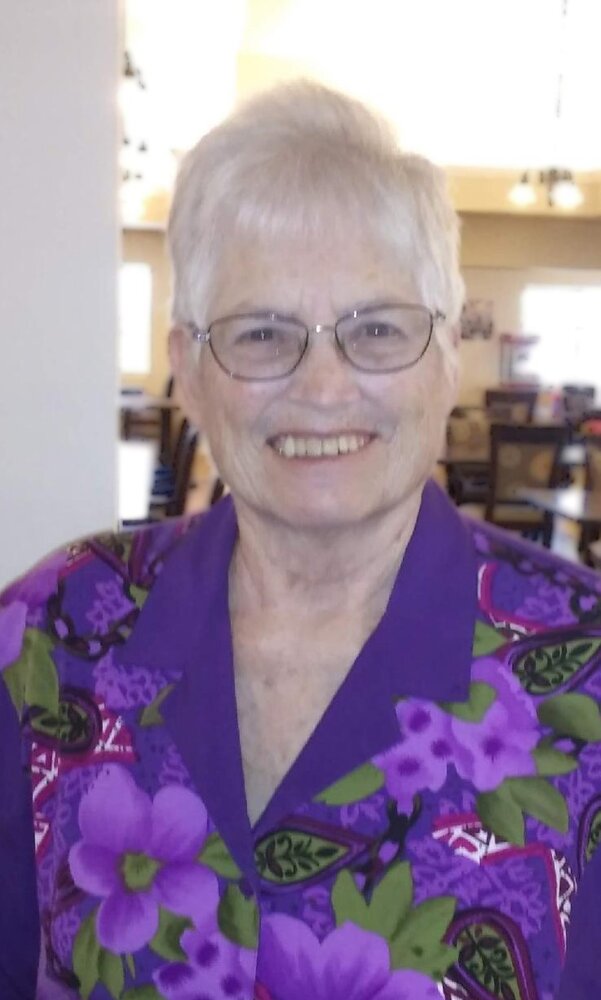 Please share a memory of Karolyn to include in a keepsake book for family and friends.
View Tribute Book

Karolyn Kaye (Gant) Hughes was born at the family home located in Taylor County Iowa, on March 14, 1941, to Orval and Naomi Clayton Gant.  Karolyn was a cheerleader and enjoyed 4-H and Y-teens as a youth. She attended North Star country school and graduated from New Market High School in 1959.  Karolyn married her high school sweetheart Dave Hughes on April 9, 1961, celebrating their 60th anniversary this spring.  Their first home was in San Diego while Dave was in the Navy. Their family started to grow with the birth of Duane in Long Beach, CA. When they moved back to Iowa, they lived outside of New Market for a time when Kristine was born. Moving again to Coin, their youngest Ricky was born.

It was in Coin where Karolyn was the Girl Scout leader while Dave was the Boy Scout leader.  In 1971, they moved to what became known to the family as the “4 Acre Ranch” and “Hughes Hotel” north of Clarinda.  They raised their children there. After 45 years at the acreage, they returned to their hometown of New Market, where they continued being very active in the community and July 4th committees.  Karolyn and Dave were honored as Grand Marshals for the New Market July 4th Parade in 2016.  Karolyn was always very welcoming, using their front lawn as the gathering place for family and friends to watch the annual parade.

Alongside her husband, she was an active member of the New Market Miners Alumni Association, where she helped organize alumni banquets and was a vital part of developing the old school gymnasium into the New Market Pavilion.

She grew up attending the Church of Christ in Siam, Iowa, and remained an active member her entire life. Karolyn enjoyed leading the singing, playing the piano, and organ at church until she was no longer able to do so.

During her 80 years of life, Karolyn worked as bookkeeper at Beery Seed Company, treasurer for Lisle Corporation Employees Credit Union, which became Clarinda Community Credit Union and retired after 18 years at Goldenrod Manor where she was a CNA as well as an Activities Director.  That’s where she shined! The residents, visitors, and employees alike enjoyed her bubbly nature and listening to her sing as she would play the piano, during meals and any time, she felt they would enjoy it.

Karolyn was very resourceful. She was repurposing things long before it was a thing. With her sewing machine and hot glue gun, she would make everything from Barbie Doll clothes to book bags and from candleholders to photo frames. Her skills with a band saw provided many Christmas gifts that were painted with her signature vine of flowers.  Just about everything had either ribbons, ruffles, or lace somewhere on it.  She had tubs of materials to use for anything you could imagine, and she had an imagination.  Sometimes she would see something somewhere and figure out how to make it.  If she saw a need for something, she might finagle some random items to make what she needed. She never had Pinterest, but if she had, she would have had hundreds of boards and thousands of favorites.

Karolyn was a leader of her son’s Cub Scout den and Boy Scout Troop.  She was also a leader in her daughter’s Explorer Post.  She and Dave made a family outing of every troop campout and Scouting activity.  This helped form strong bonds as a family, as well as, making lifelong friends from all over the region.

Traveling brought many adventures and more memories. One year, the family traveled all over the western states, seeing many amusement parks and national parks. They spent three weeks of camping in various campgrounds, a beachside parking lot, and one roadside pasture.  Back then, that was acceptable.  There were trips to Canada for family reunions and on to Niagara Falls.  The biggest trip was to Germany with daughter-in-law Monika, where Karolyn learned a few German words and phrases and that “women on the right- men on the left” was the standard rest stop in the trees. By plane, train, and automobile she and Dave traveled all across the states to see family, the most important destinations of all.  Her kids, grandkids, and great grandkids brought her immense joy.

The last few years of her life were fraught with health issues.  After a short ordeal with breast cancer, she was diagnosed with late stages Alzheimer’s. Even though she may not have recognized people or remembered them 45 minutes later, she spread friendly cheer to everyone she met.  Soon after she moved into assisted living, she had a brain bleed then later a massive stroke which left profound effects that eventually took her from us.  She was freed from her frail and failing body on Sunday, August 22, 2021, surrounded by loved ones in her home at the Eiler Place in Clarinda.

Welcoming her with Jesus in Glory were her parents, parents-in-law (Kyle and Lola belle Hughes), and son Duane David Hughes.

There will be a luncheon to follow directly after the service.

Share Your Memory of
Karolyn
Upload Your Memory View All Memories
Be the first to upload a memory!
Share A Memory
Plant a Tree