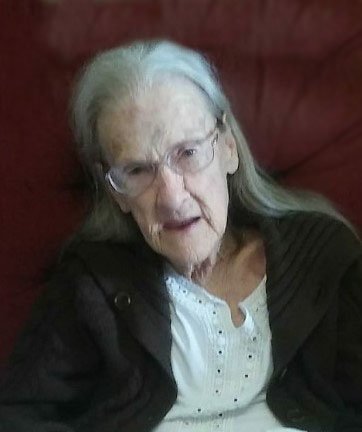 Please share a memory of Marie to include in a keepsake book for family and friends.
View Tribute Book
Marie Eva Balangue was born September 18, 1923, in Diagonal, Iowa to George and Ernestine Philpott. The family soon relocated to the Villisca, Iowa area where Marie and her two brothers, Armond and Edward; and one sister, Marguerite grew up. Marie later moved to Vallejo, CA where she lived for most of her adult years before returning to Villisca later in life to be closer to other family members. Although Marie had married several times and loved children, she had no children of her own. Later in life, she provided a home for one of her nieces in Villisca and later in Ravenwood, Missouri where she helped raise her niece’s children and grandchildren. In January of 2018, Marie fell and broke her hip which required her to move into a Care Center in Maryville where she has lived for the last three years until her passing on January 2, 2021, at the age of 97 years. Marie was preceded in death by both her parents; her two brothers; and her sister. Surviving family members who mourn her passing include many nieces and nephews from the local area of Villisca, Nodaway, and Stanton - - - as well as those further away in Missouri, Texas, Mississippi, California, and Washington State. Now in God’s care - - - But always in our hearts!
Saturday
9
January

9:00 am - 9:40 am
Walker-Merrick-Billings Funeral Chapel
422 E. Washinton St
Clarinda, Iowa, United States
712-542-2153
at 9:40 with will have a procession to the cemetery for a private burial
Need Directions?
View Map | Text Directions | Email Directions
Online Memory & Photo Sharing Event
Online Event
About this Event

Share Your Memory of
Marie
Upload Your Memory View All Memories
Be the first to upload a memory!
Share A Memory
Plant a Tree