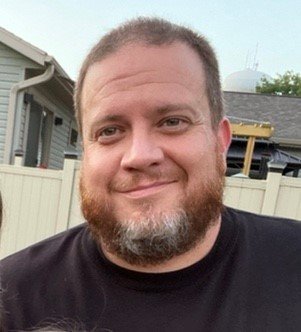 Please share a memory of Jeremy to include in a keepsake book for family and friends.
View Tribute Book
Jeremy was born January 10, 1974, in Clarinda, Iowa. He graduated from Clarinda High School in 1992. He and his wife Robin moved to Malvern in 1995, and they were married October 12, 1996. Their daughter Piper was born April 18, 2008. Jeremy later returned to college and graduated with a master’s degree in Healthcare Administration in 2015, after working and attending school full time for five years. Jeremy was a loving son, father, husband, and friend. He had many hobbies. His mom Janet and dad Milo inspired his passions for hunting, fishing, and cooking. He spent his childhood hunting and fishing with his dad. Jeremy enjoyed swapping recipes with his mom and according to her he always had better ideas for recipes! He loved to cook, bake, grill and spend time with his family. Jeremy always seemed to know what to do in most situations and gave good advice. Jeremy was very handy and could fix almost anything. His friends and family agree that he was a great storyteller and, while sometimes his stories went on and on, we all wish we could hear another one of his stories now! Robin and Jeremy met in high school. They were soul mates and best friends. They loved spending time doing projects or just being together. Robin and Jeremy often joked that they shared the same brain because they constantly had the same thoughts at the same time. The thing that Robin and Jeremy love the most is their daughter Piper. They loved family game night. He passed along his love of art, reading, and cooking to her. Piper loves her Daddy more than anything and especially loved his big bear hugs. Jeremy was preceded in death by his grandmother Opal Parker, grandfathers Merrill Parker and Beryl Beery, great-grandfather Earl Woods, uncle Gary Parker and Aunt Pam Parker Jeremy is survived by his cherished wife Robin and their beautiful daughter Piper, his mother Janet Bryson, stepfather Bob Bryson, father Milo Beery, brothers Colin (Kenzi) Beery, Colton Beery, stepsister Abbey (Colin) Heimensen, Grandmother Carolyn Beery, grandmother-in-law Pauline Ellison, mother-in-law Jo Murren, father-in-law Harold Murren, brother-in-law Christopher Burwell and many other loving family and friends.
Friday
28
August

Memorials can be made to the Family.

There will be no service.
Online Memory & Photo Sharing Event
Online Event
About this Event

Share Your Memory of
Jeremy
Upload Your Memory View All Memories
Be the first to upload a memory!
Share A Memory
Plant a Tree