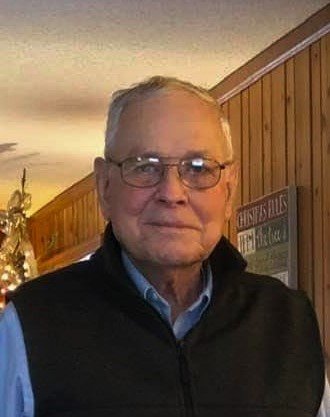 Please share a memory of Charles to include in a keepsake book for family and friends.
View Tribute Book
Charles “Rex” Galloway, passed away at the Kansas City Hospice House in Kansas City, Missouri, at 10:26 pm on April 28, 2020, at the age of 86. Rex was born on May 9, 1933, in the family home on their farm near Redding, Iowa. His parents were Julian and Elsie (Saville) Galloway. Rex had three sisters and one brother: Helen Whitenack, Elizabeth Stark, Jim Galloway and Kris Kozel. He graduated from high school in Redding, Iowa, and went on to study at Iowa State University in Ames, Iowa. He had a varied career life. Rex started out as a farmer and he learned to do excavation work with heavy equipment. He was co-owner of a fertilizer plant in Mt. Ayr for many years. He later sold sophisticated solutions for farms and industry. He came out of retirement to work with troubled youth at the Clarinda Academy in Clarinda, Iowa. Rex lived life in color and saw the world in 3-D. Life on the farm taught him how to work with his hands and problem solve. He rarely encountered an issue that couldn’t be remedied with some creative thinking. Rex was a skilled wood crafter and water color artist. In his last year, he explored oil painting and learned to work with clay. He was a gifted teacher and story teller. He taught Sunday School for many years and shared his artistic talents at family reunions and many other settings. He lived most of his life in Iowa. He married Anna Yvonne Austin in 1952, and they raised their family in Redding and Mount Ayr. They lived a short time in Cedar Rapids, Iowa, and later moved to Villisca, Iowa. Rex and Yvonne divorced in 2000. He later married Doris Acton, and they lived in Villisca until Doris’s death in 2018. In Villisca, Rex was actively involved in his community, church, and various organizations. He had an appreciation for the rolling hills and pastoral landscape of Iowa. He found pleasure in working in the yard, garden, and fields. In May of 2019, Rex moved to a retirement community in Kansas City, Missouri. He enjoyed hearing the life stories of the other residents and took advantage of as many activities as he could work into his daily schedule. He had many plans to enjoy his “city life”, but a new diagnosis of multiple myeloma interrupted those plans. Rex is lovingly remembered by his four children and their families; daughter, Kathleen (Bob) Ross of Leawood, KS; daughter, Debbie (Mike) Gilliland of Mt Ayr, IA; son, Robert (Carol Anne) Galloway of Kellerton, IA; and son, Mark (Laurie) Galloway of Prior Lake, MN. Rex had 10 grandchildren; Jacque, Joel and Jennifer (Kathleen); Matthew, Maggie, and Mitchell (Debbie); Sarah and Laura (Robert); Meghan and Ben (Mark). Great grandchildren include Jessica, Alyssa, CJ, and Isabella (Jacque); Eloise and Johanna (Joel); Cage, Trip, Molly, and Emory (Jennifer); Brittney, Bria, Blake and Bradley (Matthew); Elijah and Benjamin (Maggie); Jeremiah, Raylee, Brylee and Gracelynn (Mitchell); Will, Kate and Anne (Sarah); and Ivan, Gabriella, Evelina, and Liliana (Laura). Rex was preceded in death by his parents; his wife, Doris; and his sister, Elizabeth Stark.

This will be a private family burial due to Covid-19 concerns.
Online Memory & Photo Sharing Event
Online Event
About this Event