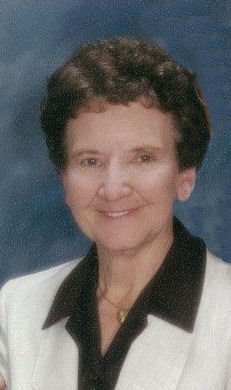 Please share a memory of Norma to include in a keepsake book for family and friends.
View Tribute Book
Norma Jean Scanlan was born November 26th, 1930 in New Market, Taylor County Iowa; to Roswell Ralph Shrimpton and Martha Ann (Rhoades) Shrimpton. She grew up In Villisca and graduated from high school there in 1949. On September 2, 1949 she married Joseph Donald Scanlan. This union was blessed with two children Sheri Jo and Steven Allan. She worked in Corning in various jobs until 1958 when the family moved to a small farm north of Nodaway which remained her home until her health required her to move to the Good Samaritan Care Center in Villisca. While at the farm, she worked for several years at the Nodaway Junior High School and then finished her professional career retiring from the National Farmers Organization when it moved from Corning to Des Moines. She was a good farm partner helping Don raise crops, cattle and hogs and continuously painting anything that was not moving on the farm. She was a member of St. Joseph's Catholic Church in Villisca for many years. She was a proud supporter of Villisca academics and athletics supporting the efforts of her daughter and son, seldom missing one of their events. As the zest for choring and harvesting began to wane, She and Don could be seen at the Nodaway Community Center or the Villisca VFW assisting and playing with their bingo friends. An occasional trip to the Casinos in Council Bluffs would usually end with a success story about penny machines. As her health began to fail, she spent her last 7 years at Good Samaritan, 2 1/2 of those years with her constant companion, husband Don. During her time at Good Samaritan, she received the special care and friendship that is part of life for those lucky enough to be living in a small Iowa farm community. Norma entered into rest on February 3, 2020 at the age of 89. She was preceded in death by her husband of 67 years, Don, parents; brother Ross, brother Leo, and sister Lois Gatewood. Cherishing her memory are children, Sheri (Scott) Siebrass of Springfield Nebraska, Steven (Susan) Scanlan of Omaha, Nebraska, grand children Staci (Brandon) Cohn of Lincoln, Nebraska, Shannon (Alan) Rogers of Peyton Colorado, Tabitha Siebrass of Lincoln and Vanessa Siebrass of Omaha, and 6 great grandchildren; sister Pat Warnaka of Omaha along with many nieces, nephews, cousins and friends. Cards and remembrances to Steven Scanlan 7609 North 124th Street Omaha, NE 68142 Memorials to St. Joseph Catholic Church, Villisca, Villisca VFW, or Nodaway Community Building.
Wednesday
5
February