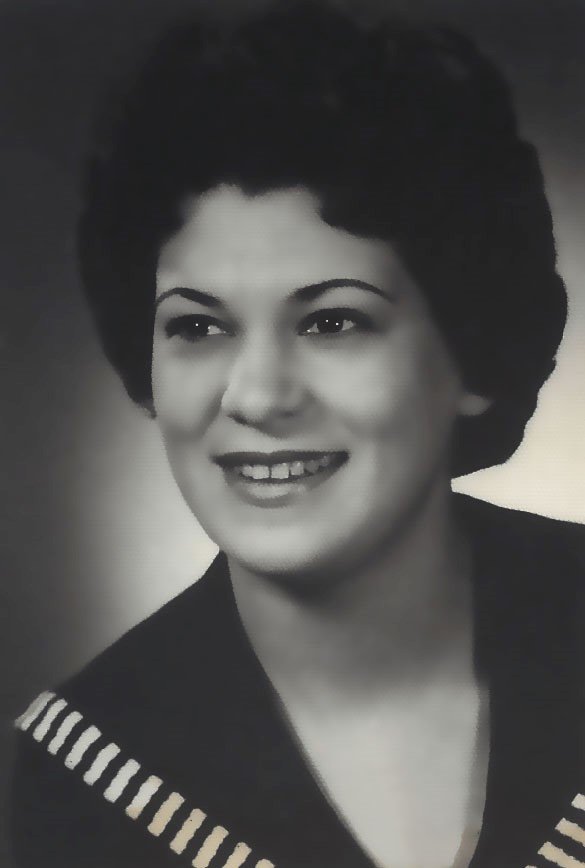 Please share a memory of Elaine to include in a keepsake book for family and friends.
View Tribute Book

Elaine Enarson, daughter of Don and Charlotte Enarson, was born at home on May 1, 1937. Her 3-year-old brother Tom remembered it as when the doctor brought her to the home in his “little black bag.” Tom and Elaine were joined on August 26, 1946, by younger sister Karen.
Elaine was always very active and had no problem following Tom with his older friends and keeping up with them. She loved the swimming pool and spent many hours there, developing a great tan and good swimming ability. From the time she was young, she was energetic and independent enough to earn herself the family nickname “own way”.
Elaine grew up at a time when family gatherings were common—Sunday dinners with the grandparents, aunts and uncles, and family birthday celebrations. There were many cousins on both sides of the family, and they were all close.
As she grew older, Elaine became a talented piano player, serving as one of the accompanists for the high school chorus and small groups in which she also sang. She played piano to entertain her friends and enjoyed singing along with them too. As the drum majorette for the high school band, Elaine lead the band proudly in their performances at football games and parades.
After high school graduation in 1955, Elaine attended college for two years at Northwest Missouri State University and the University of Iowa. She worked several different jobs after college including at Calvin Hall on the UI campus, a hotel in Estes Park, Colorado, and at the Union Carbide office in Red Oak. In 1965, she met Gary Gillespie and they married on November 6. They bought a home in Glenwood and Elaine worked at the Glenwood Opinion Tribune, proofreading and laying out the paper for many years.
Elaine and Gary had three children, Craig, Karla, and Scott. Their family life was full of their children’s sports, a dog always in the house (many named Burt), and Iowa Hawkeye games. These things were always important to Elaine. Her appreciation of family and especially fun with cousins was passed along to her children and they have benefited from close relationships with their cousins. Her family visited her mother Charlotte and her brother’s and sister’s families often, providing great memories, especially with nieces Laura and Jill.
In retirement, Elaine and Gary bought a home in Coralville, Iowa, where they could be close to two of their children and their families. Elaine enjoyed going to her granddaughters’ sporting events, following the Iowa Hawkeyes, having Iowa City family over for coffee, and making cards for the family. In her last years she enjoyed visits from her grandsons and delighted in their energy.
Elaine was preceded in death by her parents and sister Karen. She is survived by husband Gary and dog Burt; son Craig Gillespie and friend Renee Newton, Omaha, NE; daughter Karla Fay and husband Mark, granddaughters Madison and Rylee, Iowa City, IA; son Scott Gillespie and wife Jill, grandsons Gavin and Jaxson, North Liberty, IA; brother, Tom Enarson and wife Susie, Villisca, IA; brother-in-law Ed Ginger, Northbrook, IL; brother -in-law Dennis Gillespie and wife Diane, Omaha, NE; sister-in-law Joyce Kennon and husband Phil, Red Oak, IA; sister-in-law Judy Kay Meyers, Littleton, CO; many nieces, nephews, cousins, and friends. Memorials can be made to the Elaine Gillespie memorial fund.

Share Your Memory of
Elaine
Upload Your Memory View All Memories
Be the first to upload a memory!
Share A Memory
Plant a Tree