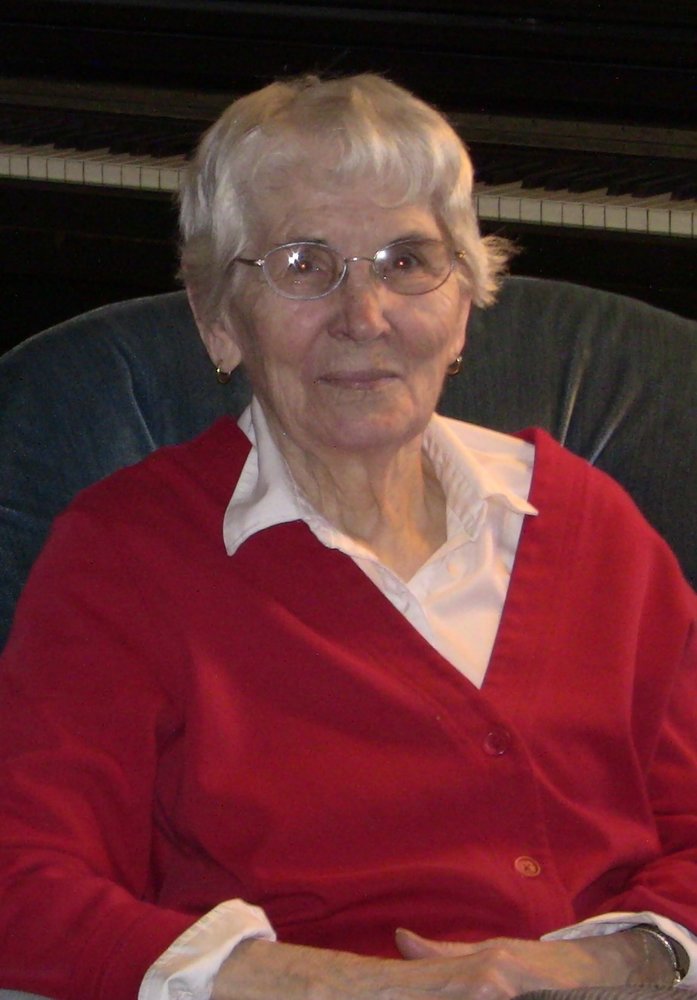 Please share a memory of Elaine to include in a keepsake book for family and friends.
View Tribute Book

Elaine Artlip, on June 27, 2019 which was less than a week from her 96th birthday, passed away at home on Artlip Street in Villisca.  The widow of Charles “Buzz” Artlip.  Elaine was the daughter of Albert and Ruth (Lary) Corbin of Grant.

A graduate in 1941 from Grant High School, Elaine worked for a year in Red Oak before eloping to Maryville with her longtime sweetheart, Buzz, on April 3, 1942.  The newlyweds lived in Villisca for a few months before moving into the house in Tenville that Bruce Orton built for them.

Their first child was born just 10 days before Buzz had to report to the U.S. Army and Elaine and the baby moved back to the home farm in Grant until they could follow Buzz around the country to various Army bases.  While Buzz was stationed in Norfolk, VA, Elaine worked for the United States Navy.

After the war, they returned to Tenville.  They soon added a daughter to their family and buzz bought the cream routes from Bruce.  Elaine was the consummate housewife, cooking, sewing, knitting, crocheting, cleaning, quilting, canning, baking, and driving her children and the neighbor kids wherever they needed to go.

After the kids were grown up, Elaine branched out into a number of fields.  She was the organist for the Villisca Presbyterian Church, she gave piano and organ lessons, and she taught Sunday School and Bible School classes for many years.  Then she entered into a decades long study into both hers and Buzz’s ancestries.  She also became fascinated with local history and was the author of more than two dozen books on regional history and family (elaine.artlip.com). She also served as township clerk for Washington Township for 25 years.

In addition, she and Buzz spearheaded the drive to renovate the Sciola Baptist Church, which is the oldest surviving church building in the entire county.  In addition, she was responsible for getting the church on the National Register of Historic Sites.  Later, she was a driving force in getting the church moved to the history center in Red Oak in order to save it for future generations.

In 2005, after six decades in Tenville, Elaine and Buzz moved to Villisca, back where they started as newlyweds.  Since Buzz’s death in 2014 Elaine lived alone in the big rancher.

Share Your Memory of
Elaine
Upload Your Memory View All Memories
Be the first to upload a memory!
Share A Memory
Plant a Tree